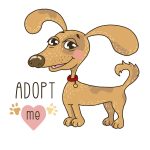 A dog rescue in San Diego helps you give a homeless dog a permanent home. You not only get to save a homeless dog but also create room for more dogs to be rescued by the dog center. Unlike buying a dog from a pet store, adopting a rescued dog is a bit different. This is mostly because most of these dogs have had bad experiences with their previous owners. Here are some important things you need to know before you adopt a rescued dog.

He will be scared
Your new furry friend doesn’t know that you saved him. He will be freaking out. This is very normal. The one thing you need to understand is that he has been through quit an ordeal. He might have been abandoned by his previous owner or was mistreated. Either way he will be very wary of you. You are a stranger to him and it will take time for him to warm up to you. You have to be very gentle with him. You also need to give him ample time to get used to you and his new environment. Before a dog adoption, it also pays to read more on the signs that your pup is scare or mad at you. The last thing you want is to push him further away simply because you misunderstood the signs.

You don’t know anything about his personality
You obviously did some research on the dog breed before making your choice. Learning about the breed’s temperament will give you information on his temperament. The problem is that yours is a rescue and most rescued dogs have had bad pasts. They might have acquired some learned behaviors. With a puppy rescue in San Diego, you have to expect the unexpected. These dogs can be unpredictable so don’t leave them unattended. It is only with time that you will be able to understand their true personality and use training and socialization to fix those issues.

Training will be a must
Even for an adult dog, you will still have to train him. The purpose of training is not just to correct behavioral issues but also to help you bond with him. Consistent training is the key to correcting behavioral issues and establishing the habits that you want. Training should also include introducing him to your other house pets. You don’t want him to keep chasing after your cat or to eat your bunny.

The important point to understand before going through with a puppy adoption is that your new furry friend will be different from your other dogs. This is mostly because he doesn’t know you and it takes time for him to trust you. Additionally, with a rescued dog, you might never know what breed your puppy really is because most of them are not pure breeds.